Thank you to Eli Lilly and their facilities contractor, Sodexo

Windlesham Field of Remembrance - If you go down to the Woods………….
Windlesham Field of Remembrance is managed and maintained by volunteers from the community.
Over the last couple of years we have unfortunately lost a large number of trees in the woods to winds and the ageing of the silver birch and we have been obliged to instruct a tree surgeon to fell and cut up the trees in order to ensure safety of people walking in the woods.

Due to our severely limited finances we could not afford to have these trees removed from site and this has resulted in a lot of fallen timber lying all around the wooded areas. Efforts have been made to try and clear areas but the amount of work proved to be overwhelming.  However, for the second year running Eli Lilly and their facilities contractor, Sodexo, have come to the rescue and kindly offered a team of volunteers to tidy up the ground cover in the woods.

On the 18th September a team of 17 of their staff worked extremely hard the whole day clearing large areas of the woods, cutting up the fallen trees and chipping the foliage. As a result of this great effort many areas and paths have now been cleared and the woods are now looking much more presentable.

The team also suggested the building of natural habitats utilising the larger pieces of timber that could not be chipped. As a result we now have a number of spectacular wood piles and stacks around the woods which hopefully will soon be home to the wildlife. As part of the management of the woods we are keen to encourage to establishment of these natural habitats. The team also undertook the massive task of clearing an area within the woods around which we will put up bird and bat boxes that were kindly donated by Woodcote School. It is our hope that this enclosed area could become a point for nature education.

None of this work could have been undertaken without the help of the team from Eli Lilly and Sodexco and we certainly could not afford to employ someone to do this. We believe this generous commitment by Eli Lilly has saved the Charity over £2,500 and for this and all their efforts we are most thankful and grateful.


There is still a lot of work to do.  If you would like to help out around the site please contact Peter Harrington on 07801 978640 or on sec.WFR@gmail.com 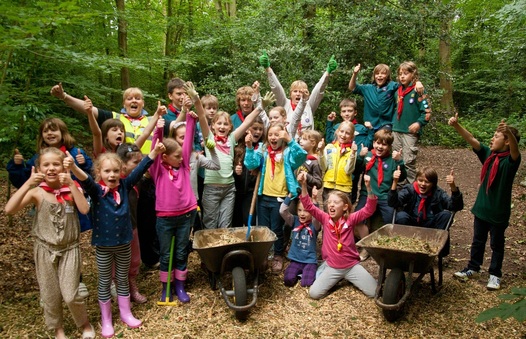 Over the course of a weekend many volunteers from Windlesham came together to help undertake essential work on the woods which are a part of the Windlesham Field of Remembrance.

The woods and the field are a dedicated memorial to the Windlesham residents who died during the two World Wars and are priceless assets of the village, for sports and recreation. The Field of Remembrance is run by the Charity and administered by volunteers and survives through donations from local people.

Guided by a local tree surgeon, who kindly gave his time for free, large areas of the woods were cleared to ensure the establishment of saplings. The tree surgeon also undertook a lot of work on the mature trees that had been damaged in the recent winds or required the removal of branches. Local villagers came and helped collect the dead wood and by the end of the weekend an extremely large amount of chippings and logs was created.

The 1st Windlesham Guides, Brownies, Scouts and Cubs kindly volunteered to spread these chippings on the footpaths within the woods. Accompanied by parents with wheel barrows and rakes the youngsters set a frantic pace, wheeling barrow loads of chippings through the woods. The youngsters worked tirelessly and with enthusiasm and within a very short period the main paths were covered and new walkways were created through the woods. By the end of the afternoon the youngsters were still keen to continue but many parents were suffering from aching limbs.

The Trustees of the Field would like to thank everyone who came to help but in particular the 1st Windlesham Scouts, Cubs, Guides and Brownies who did such a marvellous job and demonstrated dedicated team effort.